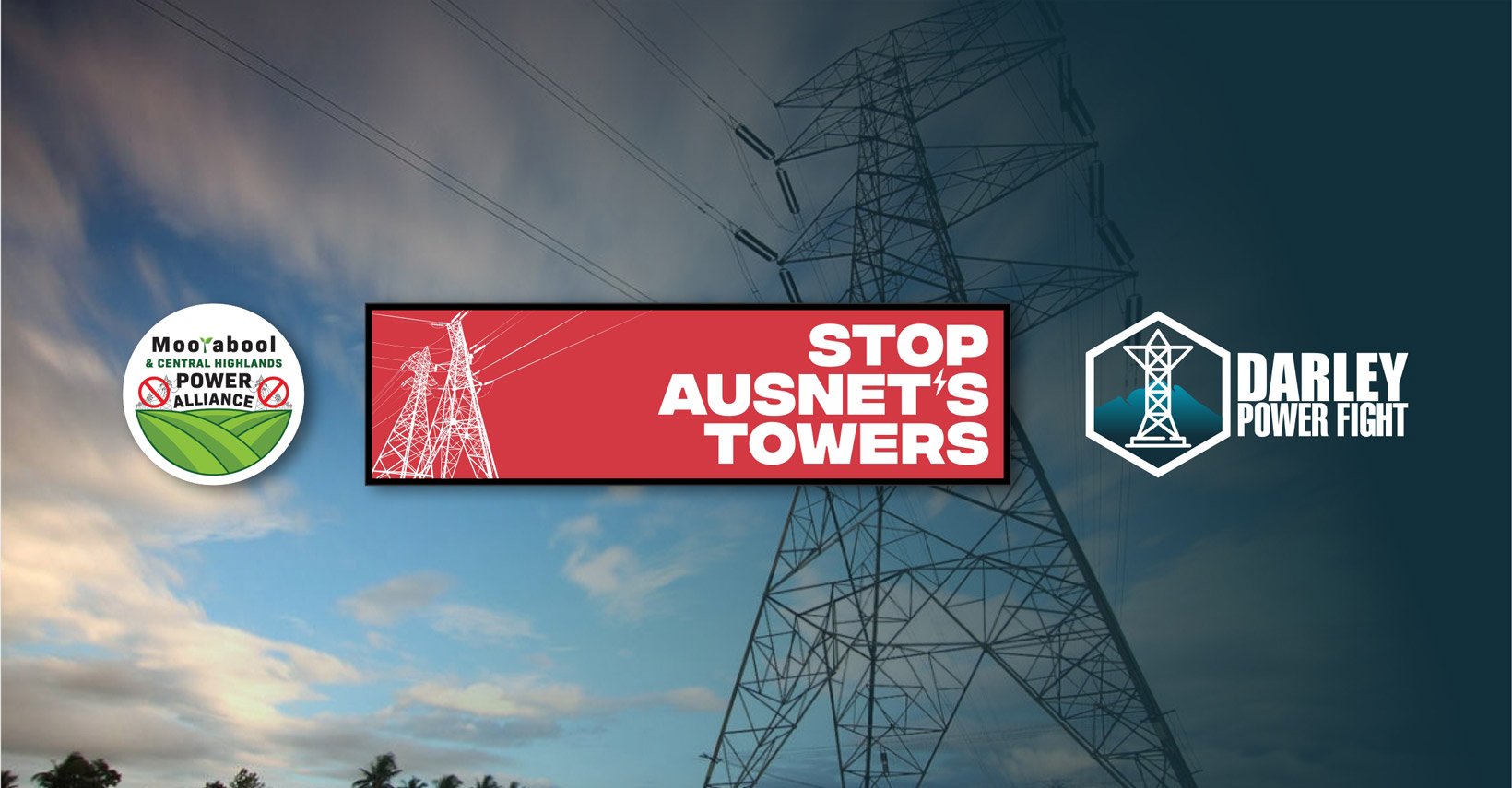 How It All Fits Together

If you have just heard about the The Western Victoria Transmission Network Project (WVTNP) you may be wondering who is behind the campaign to stop these towers. I wondered the same thing myself when I first joined the fight. Before I explain, I’ll tell you a bit about how I came to learn this shocking news (pardon the pun).

We used to live in Coimadai, on a spectacular eight acres overlooking the Lerderderg State Park. This is where our love for this region started. As the kids grew, we decided to move closer into town but were reluctant to give up our stunning outlook. After months of searching we found a great block of land at the northern end of Darley, overlooking the southern end of the park. When then embarked on a two year project to build our own home (as owner builders), what an experience. Now it’s all complete, we love nothing more than spending time in our rear yard, thrilled we are still so close to the gorge and its sweeping views. The outlook is amazing and we love relaxing on the balcony watching the black cockatoos and wedge-tailed eagles circle above. Such a great feeling to have nature on our door step.

Then one day, we heard a rumor of transmission towers. It was mentioned to us in passing buy a guy who dropped in to buy a few kayaks we were getting rid of. Long story short, I have not slept well since that fateful day (over six months ago now) as the mental anguish keeps my awake most nights. The knowledge of this project and the lack of understanding from AusNet is soul destroying. There is no price you can place on mental health and the benefits that living in a rural setting can bring.

So we joined the fight and were introduced to a group from the Moorabool and Central Highlands Power Alliance (MCHPA). The MCHPA started around June 2020 when residents over the hill from us in Myrniong were made aware of a proposal to build a high voltage transmission network from Sydenham to Bulgana, right through their properties. They started to fight only to learn that the Project was larger than they could have ever imagined and included six renewable energy zones across Victoria, three in the west of the state. This group of passionate people have been tirelessly fighting the fight ever since.

To raise public awareness and put a stop to the Project, the MCHPA developed a campaign with a bold, powerful message, Stop Ausnet’s Towers  The MCHPA represents the Moorabool Shire and Central Highlands inside and bounding the “Area of Interest” corridor. This group, via the Stop Ausnet’s Towers campaign, is extremely important to ensure each region can connect and work with their local communities and fight as one under the MCHPA umbrella.

The MCHPA then created four regions to represent all interests ensuring everyone has a voice and every voice counts.  These regions within the Area of Interest corridor support agriculture, farming, residential, tourism, to name a few. The impact on these regions is different but our plea is the same, STOP AUSNET’S TOWERS. As the impacts are different, local communities are also fighting their own battles and collectively, we fight as one and are all supported by the MCHPA and the Stop Ausnet’s Towers campaign.

Darley Power Fight is group of local residents in Darley, Coimadai and Merrimu. We are united against high voltage transmission towers passing through our backyard. We are working together and with the MCHPA to increase pressure on AusNet and government to ensure alternate viable solutions are considered. Our local community came together through the realisation that a potential corridor passes right through the heart of OUR residential, significance areas, wildlife habitat and public open spaces. The irreversible impact on our property values, visual amenity, wildlife, environment and local community is huge.

We wanted our local group to have a public face, a platform to get our community involved, and a way for people to easily sign petitions. So, I sat down over a week of really late (4am) nights and bucket loads of coffee to built this website and our Facebook community. Lucking I am a graphic and website designer so my only costs were time and lack of sleep. It is now our mission to work even closer with our local community and the MCHPA in support of the Stop Ausnet’s Towers campaign so together we will make a difference and STOP THESE TOWERS!

I keep telling myself ‘this is my only chance to stop these towers, so put everything into it NOW or in a few years time, I will be looking at 85m towers in my view and will be kicking myself for not doing enough’.

Join the fight and get involved!

There are some who would have hoped to fracture our community but instead they have united us.

For more information on the Moorabool and Central Highlands Power Alliance and the Stop Ausnet’s Towers Campaign, visit www.stopausnetstowers.com.au 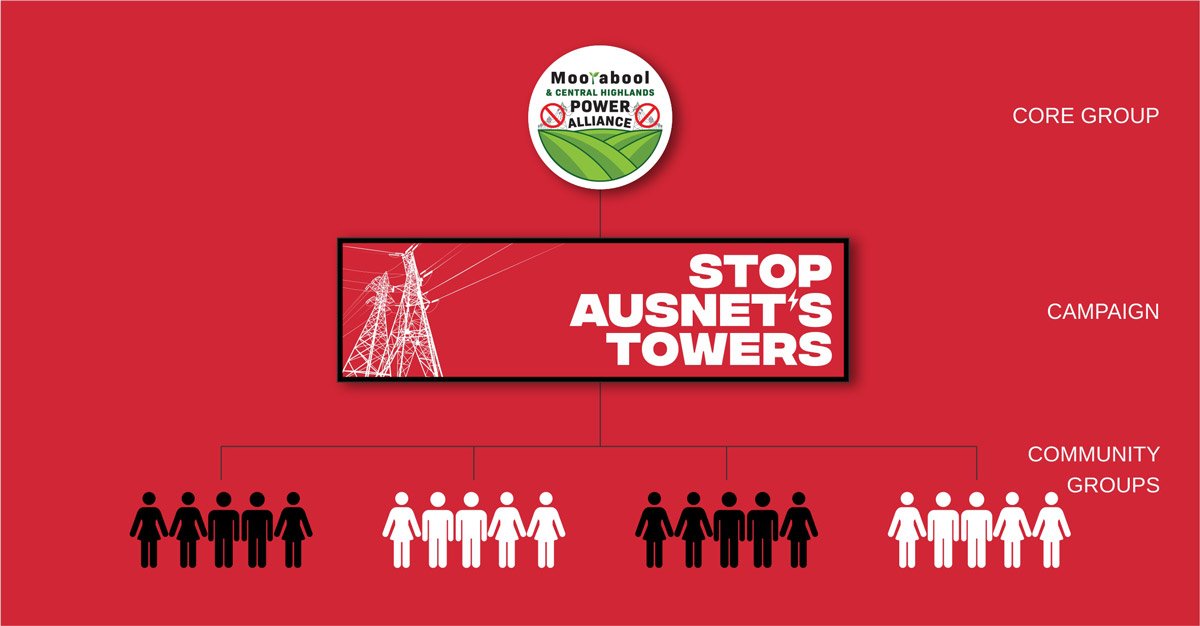